The last two decades has seen the fine wine market experience an evolution. Historically wine collection has been the reserve of old world ‘gentleman’ and a select few in China and the States. Now investing in wine is a borderless pursuit, with the market available to anyone with a passion and an internet connection. This increase in participation has been elemental in the explosion of price and demand in a market where supply is fixed and finite.

This transition from a shuttered market full of nepotistic relationships, to a truly global and free market place, has happened rapidly. Stimulated primarily by the global proliferation of high-net-worth individuals looking to enjoy a classic symbol of status, the wine market simply needed to embrace evolution. The old world way of trading needed to be brought into the 21st century.

The Rise of The Global Millionaire Population 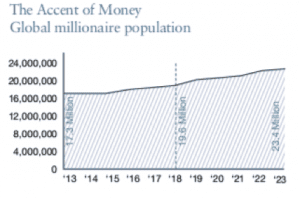 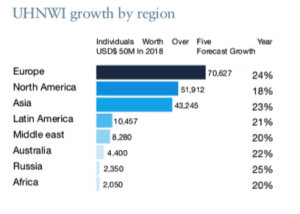 The market opportunity created around the globe by this new wealth could not be ignored, and while wine infrastructure has for years been striving to catch up, we are pleased to say it now meets standards set by similar investment markets.

Projections of Wealth Proliferation Around the World

The radical transformation of the last decade is encapsulated best by the evolution of the Asian market, particularly China. The level of education, engagement and desire surrounding the consumption of the very top-tier of wines in China has rocketed. Now highly motivated and more than financially capable, the value and volume flowing East now ranks China comfortably as the largest consumer of fine wine in the world.

The Eastern Market’s Expansion Since 2009

This BRIC’s (Brazil, Russia, India, China) driven expansion will continue to have two major impacts. The now truly global marketplace includes a wide range of participants whose primary currency is not GBP Sterling. Consequently, the fine wine market responds well to a weak pound, providing routes for timely liquidation all over the world. In addition, the continued exacerbation of the supply and demand imbalance, which underpins favourable price development, does not look likely to wane. As more new hyperwealth is generated within these BRIC’s nations the market looks set to march on. The number of individuals looking to enjoy and own the old world trappings of success is, and will continue to, rapidly increase.

The Expansion of BRICs Appetite For Imported Wine

In this guide you will find the answers to:
Start typing to find the wines and spirits you are looking for.
BiBO
We use cookies on our website to give you the most relevant experience by remembering your preferences and repeat visits. By clicking “Accept”, you consent to the use of ALL the cookies.
Cookie settingsACCEPT
Manage consent

This website uses cookies to improve your experience while you navigate through the website. Out of these, the cookies that are categorized as necessary are stored on your browser as they are essential for the working of basic functionalities of the website. We also use third-party cookies that help us analyze and understand how you use this website. These cookies will be stored in your browser only with your consent. You also have the option to opt-out of these cookies. But opting out of some of these cookies may affect your browsing experience.
Necessary Always Enabled
Necessary cookies are absolutely essential for the website to function properly. These cookies ensure basic functionalities and security features of the website, anonymously.
Functional
Functional cookies help to perform certain functionalities like sharing the content of the website on social media platforms, collect feedbacks, and other third-party features.
Performance
Performance cookies are used to understand and analyze the key performance indexes of the website which helps in delivering a better user experience for the visitors.
Analytics
Analytical cookies are used to understand how visitors interact with the website. These cookies help provide information on metrics the number of visitors, bounce rate, traffic source, etc.
Others
Other uncategorized cookies are those that are being analyzed and have not been classified into a category as yet.
SAVE & ACCEPT
Shop
0 Wishlist
0 items Cart
My account